The region of the Euphrates Island is one of the regions characterized by an important, geographical and strategic location in Kurdistan and the Arab region. This region is characterized by its prominent presence in various eras of history, and perhaps the golden era of this region was in the ancient and medieval   history (Islamic history) when some states and civilization were founded. For example, The Metan and Assyrian states were founded in the ancient history, the Hamdanids,  Zangids and Ayyubids were founded  in  the medieval history (Islamic history). In the modern era, several Kurdish emirates were established, perhaps the most prominent and most powerful being the Bhutanese Emirate.

When looking for the history of the region in the modern era, the fate of this region is very similar to the fate of Kurdistan. It can be said that it is a miniature version of Kurdistan.  Kurdistan was divided between four countries: Turkey, Iraq, Syria, and Iran although it was a unified territory within the borders of the Ottoman Empire even after the First World War. 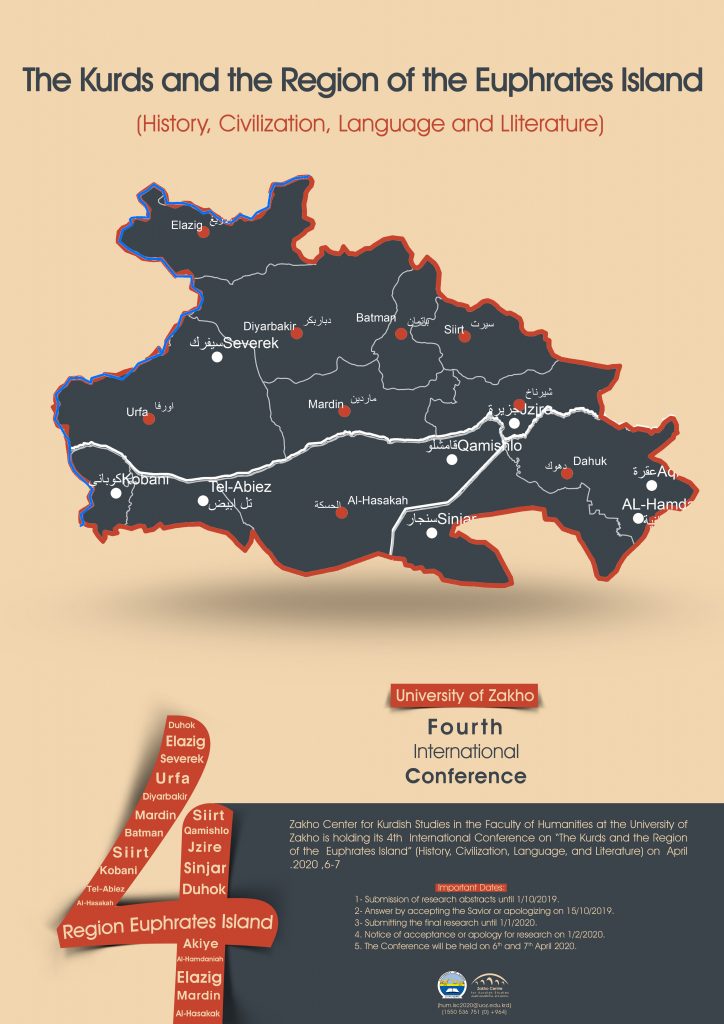 The main reason for choosing the name “The Kurds and the Euphrates Island Region: history, civilization, language and literature” as the title of this conference, is due to the fact that most of the population living in the northern part of it are Kurds since ancient times, which is one of the important regions that form Kurdistan, by joining together wide strategic geographical areas.  It was overpopulated throughout the history. The conference aims to shed light on the social, economic and linguistic aspects that formed the national and cultural identity of the island, and try to understand the human life  on the academic bases throughout the different ages of history.

The vision of this conference is to shed light on the complex aspects of the island’s history, and to answer many questions to unveil the reality of life in this region, for example: What is the national composition of the island through different eras of history? What are the relationships between the people living in this region? What are the ethnic and national changes that this island has witnessed even after the First World War? How did people live with the emergence and spread of different religions and religious groups on the island? How did the policy of empires in the ancient and medieval history, and the policy of the super Powers of modern times affect the realities of life on the island and its future?

The Information about the geographical boundaries of this region is still somewhat vague. It is now known that the name of the Euphrates Island is now called the land between the province of Nineveh in Iraq and Hasakeh in Syria, but historically this region has included many areas extending from the eastern bank of the Euphrates River, In particular, from the Kobani region (Ain al-Arab) east of the Syrian-Turkish border to Albukamal on the Syrian-Iraqi border. Whereas inside Iraqi, it extends from Anah south  including the provinces of Nineveh, Salah al-Din and Duhok and part of the province of Erbil, while its northern border lies within The Turkish state encompasses the areas from Schernach to the island of Bhutan, Hesenkeva, Sirte, Batman, Mardin, Alazig, Diyarbakir and Urfa to end again and meet the Syrian border on the banks of the east of the Euphrates.

Closely looking at the area of ​​the island shows its ethnic, national, and religious diversity. Different people inhabited this region, such as Kurds, Arabs, Assyrians, Yazidis, Chaldeans, Armenians and Turkmen. Their religions are Islam, Christianity, Judaism, and Yazidism, therefore, we find a great difference between its inhabitants   whether  nationally, linguistically or religiously. These people have lived together peacefully as if they are of one colour, nation, and religion in spite of some convulsions of history.

The Kurdish Part of the Euphrates Island

The focus of this conference will be on the Kurdish part of the Euphrates Island, which can be called the “Kurdish Island”. Its geographical borders can be determined by the line that runs from Kobani (Ain al-Arab) on the eastern bank of the Euphrates River on the Syrian-Turkish border to cover most of the Husnkifa province in Kurdistan of Syria ending in Sinjar province, and within the Iraqi borders, the borders of the Kurdish part of the Euphrates Island start from Sinjar, passing through most of the northern areas of Nineveh province to Aqra district including all the province of Duhok. Its borders in Turkey start from the Chernach region including the cities of Siirt, Batman, Bhutan Island, Husnkifa, Elazig, Diyarbakır and Urfa, and to meet again the Syrian border on the east bank of the Euphrates.